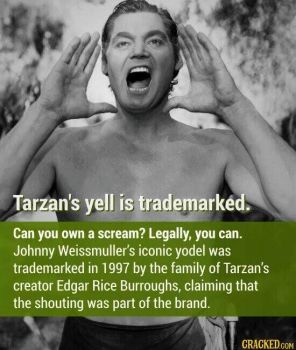 From an article by Andres Diplotti at the comedy website Cracked.com, June 9, 2021.

You know what's better than knowing a lot of things? Exactly -- knowing even MORE things! The more you know, the more interesting you are -- that is a science fact. We at Cracked strive to make you as interesting as humanly possible, so we regularly compile these collections for you. It's OK, you don't need to thank us.
Created by Mischka Published 10 June 2021

That must have been a fun job! Too administrative for me, but I bet you were a rock star.

No, I did not work at the nightclub. I was the Special Events Director for the 'high rollers' that visited the casino. I threw all kinds of parties/dinners for these people. :-))

@Donnajames, and what role did you work in this nightclub? ;-)

Carol Burnett used to always do that call sometime during her show on TV. At the casino I worked in we had a nightclub called Tarzan's and a restaurant called Jane's also a bar called Cheetah's. Every year they paid a hefty royalty for the use of the names. I can see the royalty for the name Tarzan...but Cheetah's and Jane's???????? That is such common names.

My mom and I both thought he was a hunk and true athlete.

@nrhartman, thank you for the priceless story! :-D

He was my favorite, too. I have all of his Tarzan movies AND all of his Jungle Jim movies.

He was my favorite Tarzan of all of them! TFS

I recall a 1984 obituary article about Weissmuller in "Time" or "Newsweek," when he died in a California nursing home. The magazine writer made disparaging remarks about him, stating that the Olympic swimmer (he broke more than 50 American swimming records alone during the 1920s) was a poor actor and even his famous call was created in the studio. The following week, in the Comments section, I spotted - and still have - a terrific, three-short-sentence reply from Mia Farrow's mother, Maureen O'Sullivan, who co-starred with Weissmuller in most of his Tarzan films, starting with his first one in 1932. O'Sullivan said, "Johnny Weissmuller's call was real. I know. I was there."

It was commonly head being made by kids my age.
We coulda been sued! :-0

Lets get ready to rumble is too.