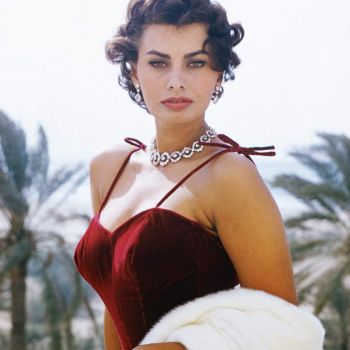 As a young child I saw the movie "Two Women" starring Sophia Loren. It was a powerful movie - I think the first that moved me emotionally. I couldn't understand all of its subject matter but I knew it was raw. But what I left the movie theater with was Sophia Loren's beauty, grace, and performance. She won the Academy Award that year as Best Actress. It was the first Oscar given to an actor for a non-English speaking role.

She turns 87 this September - still beautiful, still gracious - and much of that beauty resides within her soul. She was born in Rome in 1934 to an unwed mother and only met her father three times in her life. Seeing Rita Hayworth in "Gilda" she dreamed of becoming an actress. In 1950 at a beauty pageant she met her future husband, Carlo Ponti. who was 22 years her senior. They became lovers in 1954, married by proxy in 1957, and by law in 1966. They remained together until his passing in 2007 having two sons and four grandchildren. She now lives in Geneva, Switzerland.

In interviews she speaks forthrightly. When asked about appearance, she stated:

And upon being asked if she ever felt lost, had self-doubt, she responded immediately:

“Yes, well, maybe sometimes. But then I say to myself: ‘Shut up. Be strong. Just keep going and try. Sometimes you make mistakes and sometimes you win.’ I made some mistakes, but still I won.”

This past year, 2020, marked the 91st performance of her long film career. "The Life Ahead" can be seen on Netflix. She portrays a Holocaust survivor and former sex worker who now cares for the children of other sex workers. The trailer can be seen here:

What can I say? I loved her then and I love her now. We will always love her.
Created by scifi72 Published 1 July 2021

Desiderata one of my all time favorite poems by Max Ehrmann.

I love her and had a picture of her on one wall and on the other wall of my room I had the poem "Desiderata" when I attended the Navy's Nuclear Power School in Vallejo, Mare Island, Ca.

What a classy, elegant beautiful woman. I love her philosophy.

In 1968 the Motion Picture Association of America (MPAA) established a system of movie ratings for parents to use as a guide to determine the appropriateness of a film's content for children and teenagers.

Sophia is still a knockout, another quote from Ms. Loren "“When I look in the mirror, I cheer for myself. I don’t ask, ‘Are you great?’ or ‘Are you beautiful?’ No! It’s how I feel inside, how secure I am, how happy I am. That’s what matters,” the Italian icon noted as her principal rule of thumb.

@scifi72 Truly one of the few iconic beauties. Thanks.

"Two Women" Magnifecent movie :) I bought it years ago and still one of my favorites :)

I didn't know about the affair--but I wouldn't blame her. Funny, your remarks remind me that my cousin and I got to go see "she wore a yellow ribbon" with John Wayne. I think I was maybe 5 and she was 6. My uncle left us at the theatre. It was the first movie I ever saw.

I can't remember how I got to see it. Was there a rating systems then? I remember my mother used to leave me at the movies to act as my babysitter. I loved it! Maybe she thought the title "Two Women" sounded safe but yes, that rape scene was so vivid. Even up until the 1970's parents let kids go places by themselves. We didn't need seat belts. And pregnant women smoked and drank. Oh yeah, butter tasted good and lard was used for cooking. Different time, @Sufidancer

Houseboat - I have to watch that again. I bet it will be fun. You know of the affair she had at that time with Cary Grant? He fell for her hard but apparently she pulled back. Remember, she was just 23 years old then. She went on to marry Carlo Ponti in 1966 but first married him in Mexico by proxy in 1957. They had had troubles with Italy's divorce laws not resolved until they became French citizens in 1965.

She is the essence of a "Star" wrapped in a beautiful soul. I am surprised you were allowed to see the movie "two Women" at a "young" age. It was definitely an adult theme but you are right. She gave a powerful performance. I think I have seen every movie she has ever made. "Houseboat" was a favorite along with so many others.