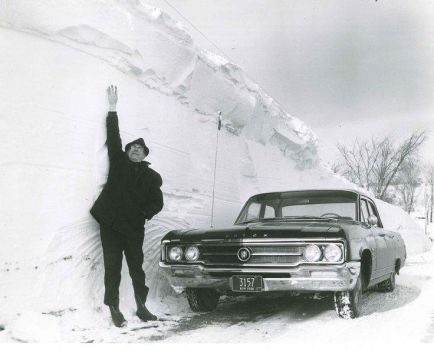 Emergency snow removal machines sliced thru the snow, sucked it up into huge dump trucks, hauled it to the edge of town and dumped it. Plows followed them to remove any snow that fell onto the road.
Created by PuzzleBug Published 31 July 2021

They use those vehicles for blizzards, whenever and wherever they occur. Most of the time standard plows operate periodically during regular snowstorms and continuously during heavy snowstorms. I think the giant vehicles are part of our federal government's emergency response system. They send the equipment wherever it's needed, wherever the circumstances meet the requirements listed as emergency or disaster. During that blizzard, whole houses were buried in snow drifts and had to be dug out. People lost electric and gas and chimneys were filled with snow and ice, so people had to be rescued to avoid hypothermia. I have not seen snow like that since then but have seen blizzards at other locations on TV news. :-)

Might be an NY State car, judging by the plate

So it's the snowblower bit that operates sideways - got it.

Oh, below is the 2nd truck. The 1st truck had a giant snowblower in front that was 5-6 ft tall and maybe 15 ft wide. It chewed a path for the 2nd truck behind it.

Imagine a box with both ends open. The box is 10 ft tall and 2-3 ft wide. The open back end of the box connects to a huge rectangular vacuum tube the empties into a giant dump truck. Think of a sideways snowblower. These trucks were the biggest I've ever seen....bigger than any farm equipment. They are only used for emergencies. A standard snowplow, or even two, would easily fit in one of those dump trucks.

Did you read the description under the photo? LOL

@PuzzleBug - and here's the photo; thanks! Did they hold the plow blade sideways, then?