Sensation Comics No. 40 April 1945 with Wonder Woman and featuring Draska the Deadly 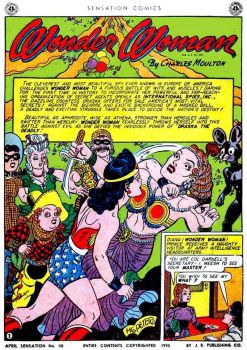 Wonder Woman has to battle Countess Draska Nishki & her group, the "International Spies, Inc.," who are trying to sell America's most vital secrets.
Created by scifi72 Published 17 May 2021

You are definitely "well educated but also enlightened - learned but understanding the scope, meaning, impact of thing." Oh yes, you are much more than just worldly, hence, according to your own very wise definition you are erudite! And what a pleasure it is to read all that you write. How'd I do teach?

Re: comics, I am wild for them. My mother forbade my brother and me to buy a comic from the neighborhood Mom and Pop grocery store and read it until we got home for fear we would walk right into traffic we were so entranced by Captain Marvel or Wonder Woman. Thank you for the reminder of Donald Duck and Uncle Scrooge, how could I forget?!?

You are good, @gvalentiine. I had to look up and understand erudite. In a way the words are similar but erudite goes further. Worldly would be like being aware of many matters in a general sense while erudite takes it beyond that to being well educated but also enlightened - learned but understanding of the scope, meaning, impact of things. Like you know facts of history but do you understand how those events shaped our world and may impact it still? I ain't no teacher but I read a lot and think. I like knowing but also connecting the dots. Today's lesson is done. Class dismissed.

I love comics! Always had, always will. Mostly I like the DC Universe as opposed to the Marvel characters but I appreciate all the independents and small publishers. And let's not forget classic Donald Duck and Uncle Scrooge. I really dig them. Wonder Woman is fabulous! She is right up there with Superman, Batman, Flash, Green Lantern, etc. I don't follow her as much now but vintage Wonder Woman (40's thru 60's) - wow!

Thank you for the kind words. I like your humor & forthrightness.

Countess Draska is trying to sell America's most vital secrets! HMMMM...
sounds like someone we sadly know all too well (2014 to 2020) Hurray for Wonder Woman my all time fave female super hero! Bash her again Wonder Woman! I usually only do puzzles on that one site but couldn't resist this yummy delicious brawl of a cover. Miss your worldly, erudite comments. (Do those two words mean the same thing?) I don't care I'm using them both!!! All the very best...

Wonder Woman saves the day - going strong now since October 1941 in All Star Comics #8 with her first feature being in Sensation Comics #1 in January 1942.