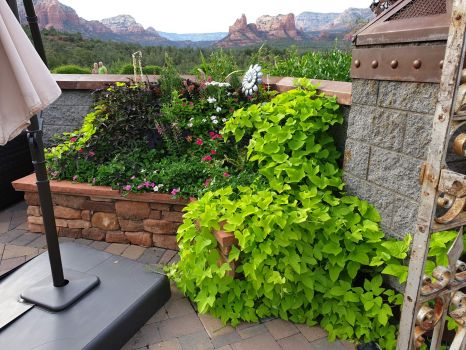 I took a photo of this beautiful flower box and discovered an absolutely gorgeous scenic view in the background. Photo taken at the Mariposa restaurant in Sedona, Arizona on July 30th, 2021.
Created by Jbprols2 Published 3 August 2021

Yep. They were actually shocked that I'd made it without freezing to death along the way.

Oh yes! I remember that story! The guys couldn't believe you walked all that way in your pajamas!

I think I mentioned walking in from the plane in my pajamas and slippers, didn't I? It was late February, 1969 - the 26th or 27th.

You must have refueled at Elmendorf Airforce base. Do you remember the year or an interesting story about that trip?
@patsquire

Wow, that's cool. My only time in Alaska was on that Air Force medevac plane from Japan to New Jersey when we stopped there to refuel.

When my husband and I lived in Alaska we went to Barrow and also to Prudhoe Bay to look at the pipeline, so I know how cold it is up there! Our tour guide was driving us around the tundra to view polar bears. We were lucky to see a male and a female at close range. What an amazing and desolate place.
@patsquire

Ahhh, snipers. I've known a few and they tell some amazing stories. They all brag about their longest shots, but my sniper friend in Texas knew one who bragged about his shortest ones. He figured, if they're coming toward you why take a difficult shot at long range, let 'em get closer!

I knew an army sniper at Ft. Benning, Georgia years ago. We was still in his 40s when he retired from the army and was looking for work. He found out an amazing thing. As far north as I think you can get in America there is a major oil facility at Prudhoe Bay,
Alaska. It is a vital national facility and it is so remote that to be a strange intruder is almost impossible, and can only be intentional. They assume that any intruder is a terrorist bent on destruction, which would be disastrous.

So they have guard towers. There are skilled snipers in them, who can make shots at very long range, so they are far apart but with interlocking fields of fire. Their mission is to kill intruders before they can do any damage. No questions asked.

My friend looked into that. It payed very well, but was so remote and cold and it was such lonely work that he didn't go there. Instead he went to the Philippines where it was hot, and he found a girlfriend and he was happy.

The came the 1991 eruption of Mount Pinatubo, which was huge and devastating, and we never heard from him again. Nobody knows what happened to him, of course, and he could be fine, which is what we hope. Life is sure weird.

Yes, you did tell me about the sidewinder. Exiting story, that! My nephew Ricky has been to that shooting range several times. He travels around the world training police men to be snipers. He keeps very busy! He is in high demand! Hope you are having a nice weekend...Bernadette
@patsquire

I just looked it up on Google Maps and learned that the closest I've been to Sedona is about 75 miles south of it. A little north of Phoenix, in other words. And while I was there I didn't see anything this beautiful in the distance! I was, naturally, doing a shooting demonstration at what is now called the Ben Avery Range, a huge (1650 acres, over 2 1/2 square miles) very modern facility for all kinds of shooting and the host to many, many national and international shooting events over the decades. It used to be called the Black Canyon Range. It's a first class (and very safe) shooting complex. While we were there, 30 or 40 of us, a sidewinder rattlesnake slithered over the sand and stopped right in the middle of us! I think I've told you about that. ☺

Sedona is such a beautiful place! Have you ever been there Pat? @patsquire

Wow! It's even better when expanded to large size. It's beautiful.

Wow, what a perfect shot, lucky or not!